It’s always tempting to use a simplistic view of our surroundings because, in the short term, it seems to conserve mental energy and make us more practical. But in many cases, and certainly in the case of clotheslines, the opposite is true.

Let’s start with an apparently trivial fact about a clothesline. No matter how taut you pull it, the line sags a little under its own weight. The curve is accentuated if the line’s material is heavier or if you start hanging clothes on it. It may superficially resemble the familiar parabola from high school texts, but it’s actually closer to being a catenary described by a hyperbolic cosine function.

Parabolic shapes in both artificial situations and in nature are actually less common than people imagine. To get a parabolic path from, say, a baseball hit upwards at an angle, there would have to be only gravity acting on it. Then the angle in flight would only be the result of the diminishing and then increasing vertical component combined with a constant horizontal component. But in reality air friction and wind change the flight path into a more complicated exponential function.

Clotheslines have disappeared from many neighborhoods not only because many people do not appreciate the mathematics of pedestrian objects. If they are a rarity it’s partly because of city bylaws inspired by their perceived unsightliness and the way they hinder the view of more pleasant things like trees and sky. What gives people the luxury of giving aesthetics priority is the existence of the clothes dryer. But clothes dryers, as essential as they may be to those with small apartments and living in temperate climates, suck up a great deal of energy, an estimated 6% of all power generated in the province of Ontario, Canada, for example. Compared to the wind-and-sun-option of clothes-drying, the combination of the mechanical dryer’s tumbling action and high heat removes more lint from clothes, wearing them out faster.

While giving convenience priority over environmental matters and household budgets, people also imagine an unnecessary dichotomy between dryers and outdoor clothes lines. But clothes can also be laid out to dry naturally and discreetly in garages and on racks made for decks and balconies. Without intruding on anyone’s views,  CO2 emissions or radioactive wastes will be reduced, assuming that certain homes rely on an electrical grid still dependent on methane combustion, coal or nuclear power. If not, there are still more benefits of natural drying:

Keep in mind that real progress lies not in developing technologies in order to be enslaved to them. We progress when we constantly evaluate their interaction with human nature and assess their health/ecological impact and adjust accordingly.

Besides in places like St. Leonard, clotheslines fulfill a dual function. They allow hot peppers to desiccate.

Walking back from an errand yesterday morning, I was startled by the length of my shadow, almost 10 meters long. Yesterday, the first day of winter, marked the pinnacle of shadow-length. From today onward, as the days will begin to lengthen, as solar angles become more generous, concentrating solar radiation on less area, the march towards spring begins and shadows will shorten.

For a variety of reasons, on any day the halfway point between sunrise and sunset is most often not exactly 12 PM  (It will only be so, after adjusting for daylight savings time, for a couple of days in January and for part of July and August). The so-called solar noon yesterday occurred at 11:52 PM at our longitude and latitude in Montreal, Canada. Like most people,  I made sure I was out in the cold, standing upright on my deck with a tape measure to determine the length of my shadow.

At that time, my 75.0 inch frame, including the one inch hat, cast a shadow 196 ± 2 inches in length. (Using the actual solar angle corrected for atmospheric refraction  it should have been a bit over 194.7 inches).

Using the fact that at a point directly south of us along the Tropic of Capricorn at a latitude of 23.5º South, the sun is at the zenith, so no shadow is cast. This is a situation similar to what Eratosthenes used to estimate the circumference of the Earth. But here we could also use the alternate and equal angles to derive an expression for latitude. Substituting h = 75.0″ and the measured shadow length = s = 196″, Montreal’s latitude works out to be 45.6º, pretty close to its accepted value of 45. 5º.

The nice thing about measuring the shadow at solar noon is that since the solar angle changes very slowly around midday, the shadow-length is relatively stable for several minutes. At about three in the afternoon I went out and measured my shadow, which was much longer than what was of course the shortest shadow of the day at solar noon. Fifteen minutes after 3 PM, the shadow had lengthened considerably. This not only happened because the sun does not sweep across the sky at a constant rate, but also because the tangent ratio is more sensitive to changes in smaller angles that occur shortly after sunrise and before sunset. Here is a plot to make what I just pointed out more obvious:

If you enjoy these types of experiments and calculations, and you want to verify your results, there is a great spreadsheet online with all sorts of astronomical calculations. They are set up so that you could easily adapt them for your own space and time coordinates. It is made available at no cost by the NOAA Earth System Research Laboratory.  Using their formulas, here is a graph of maximum solar angles I created for all days of the upcoming year for Montreal , Canada. As elevation angles increase, it’s not only shadows that get amplified. Ultraviolet rays also intensify, and knowing which months of the year receive the most helps us take precautions for our skin’s sake.

a dust mite, which feeds on dead skin cells

a scanning electron micrograph of dust

a colorized magnified view of dust

Let’s venture into the science of house dust so that, at the very least, we will make the act of dusting seem far less prosaic. Since 40 000 tons of space dust falls on our planet’s surface, some of it makes up the dust in our homes along with Earth’s own stony fragments and soil minerals. The powdery residue on forgotten books and collectibles, along with the dust bunnies hiding under the bed, also contain a heterogeneous assortment of construction materials, synthetic fibers, skin flakes, hair, insect and plant debris, dust mites, fungi, bacteria and fragments of household items.

The bacteria and fungi are present because of dust’s organic matter. The type of fungi in dust is largely determined by where one lives. In contrast, the variety of bacteria depends on who lives inside the house of dust.  Nondiphtheiroid Corynebacterium prefer the skin of men over that of women, so the amount of that bacteria reflects the ratio of men to women in a home.

Households with more men have dust with higher concentrations of Corynebacterium bacteria. 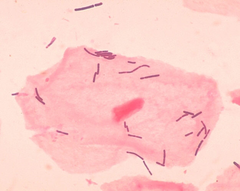 Lactobacillus, mostly from vaginal walls, is found in higher concentrations in dust from households that have more women.

Thanks to their saliva and feces, pets in the home also influence what bacterial species thrive in the dust. We are all too aware of a city’s compromised variety of animals. Similarly, microorganisms in dust from urban areas shows less biodiversity than those from rural environments. Of interest to housekeepers is that bacteria can make cleaning more difficult, especially after weeks or months of neglect. With time, bacteria in dust secrete sticky exopolymers, causing the dust to stick to the surface. Exopolymers are part of the biofilm that help bacteria survive by anchoring them, and the thicker the film becomes, the more difficult it is to scrub off.  Humidity and evaporation in the home also lead to cycles of expansion, contraction and crystallization. These processes help dust particles penetrate into imperfections of wood and other receptacles.

Fungi in dust can concentrate metals. The metallic elements can originate from outdoor minerals, or from within the home itself. Paint, for example, especially if old layers from less regulated eras are exposed during renovations, can make significant contributions. One study of 50 residences located in 10 neighborhoods across the city of Ottawa, Canada revealed that the multi-element profiles of indoor dust differs from dust of surrounding streets and yards. For example home dust had an average of 222  ppm of lead versus 33 and 34 ppm for street and soil dust, respectively.  The contents of vacuum cleaner bags had 1.6 ppm of mercury versus 0.018  and 0.048 ppm in street and soil dust. There was 4 ppm of arsenic in house dust versus an average of 1.7 ppm for outdoor sources.

In general, dust receives a variety of compounds from consumer goods brought into homes. These substances come from multiple classes of chemicals: phthalates which occur in the highest concentrations, followed by phenols, resorcinol-formaldehyde resins , fragrances, and polyfluoroalkyl substances (PFAS). In the dust of 75% of the homes in California, there was TDBPP (tris(2,3-dibromopropyl) phosphate), a compound once widely used as a flame retardant in plastics and textiles. The use of this group 2A carcinogen was banned from children’s sleepwear in 1977.

di-isononyl phthalate. Compared to that of  adults, children’s urine has a concentration that is 5 times higher.

Critics of such studies invariably point out that many compounds are detected only because of extremely sensitive instrumentation which picks up concentrations of 1 to 100 parts per billion, the upper range being that of the phtalates. They also point out that even though di-isononyl phthalate can lead to male genital birth defects, the effect is very concentration-dependent. What the non-precautionary attitude overlooks is that the phtalates are only one small part of the environmental soup. In addition to dealing with natural plant secondary metabolites and geological minerals (some of which we have evolved protective defenses against), our bodies must now cope with a host of other compounds from work and home environments, from air, food, pharmaceuticals, drinks and water. We can’t look at each contaminant in isolation and comfort ourselves with the small concentration each one contributes. Nor can we forget that all of the compounds have appeared in under 20 seconds relative to the total time of mammalian evolution. It is more sensible to be concerned about the likely significant sum of seemingly small effects. It is advisable to stop synthesizing the more pernicious compounds entirely and to reduce exposure to the other necessary evils.

Meanwhile let’s make an effort to keep the chemistry in our homes simpler and to dust frequently.