A modified version of a map in a paper by Caroline S. Chaboo, Megan Biesele, Robert K. Hitchcock, Andrea Weeks

When I was a child, my grandmother taught me how to make arrows from the softwood of a poplar, a tree that was abundant in the woods that we could step into from my backyard. Later in adolescence, biased from the movies that I watched,  I perceived arrows to be “primitive”.

It is another case of truth differing from popular perception.

Human ancestors were hunter-gatherers millions of years ago, but archery appeared relatively late, around 65 000 years ago. To make arrows far more effective hunting weapons, humans have learned to extract poisons from plants, frogs and beetles. Unfortunately, indigenous communities across the planet who hunt with arrows are gradually becoming sedentary and are losing traditional knowledge. They include  some native North American Indians; Paraguay’s Ache; the Pumè in Venezuela; the Hadza in Tanzania and 113 000 people of various San communities (use “click” languages) from Angola to South Africa (see map). Some San groups are the only ones in the world who are known to use beetles to make their poison arrows. Based on their local conditions, these invariably isolated communities have developed their own specialized poison use and preparation.

Authors of a 2016 study, focused on two San groups from Namibia: the Ju|’hoan and Hai||om. The former who live near Nyae Nyae told researchers that, thanks to older hunters, they had learnt to locate plants of the genus Commiphora, which are host to the larvae of two beetle species shown below. 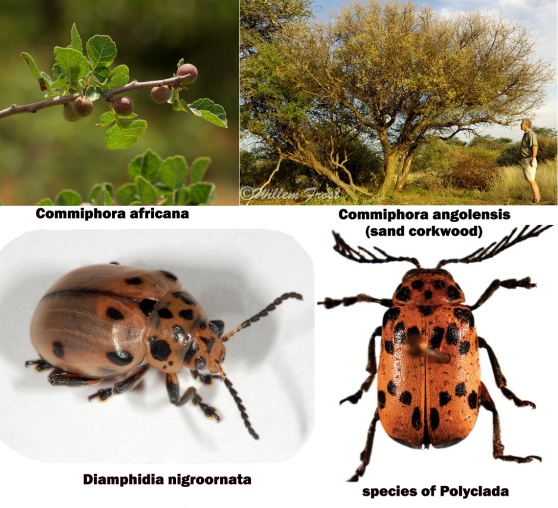 At margin of the shrub, using either a metal stick or a traditional wooden one, the hunter either digs a new 1 meter ditch encircling the plant or extends that of a preexisting one. ( (1) in picture set below)  The hunter uses his finger to sift the loosened sand with his fingers, straining out the beetles’ oval-shaped cocoons . When enough cocoons have been collected into an ostrich egg shell or plastic container (2), the hunter heads home.  The hunter makes sure that the concave surface of an animal knuckle bone faces upwards in the sand in front of him, and he places the beetle cocoons nearby. A small fire is lit. He breaks open a cocoon and taps out the single larva (3), discarding any pupae and adult insects.  Using a stick as a pestle, he rubs hard against the skin to loosen tissue, then extracts it to mix on the bone mortar (4), using about 10 larvae for every arrow. He chews the bark of Acacia mellifera to produce saliva which is mixed with the larval tissue and their “blood”, hemolymph. A bean of the toxic snake bean plant (Bobgunnia madagascariensis)  is heated over the fire, cooled and added to the mixture. Ju|’hoan informants at|Xai|Xai in Botswana told one of the researchers that they use the juice of Sansevieria plants to improve the poison. Without touching the poisonous mix, the hunter applies the ‘beetle paste’ of D. nigroornata larva with a twig to the dried sinew that fastens the arrowhead to the shaft.  The arrows are then finally dried. Their poison becomes less potent with time and expires within a year. 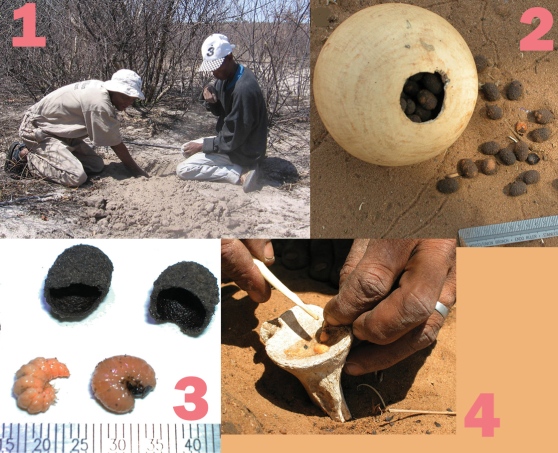 The poison is a  protein known as diamphotoxin. As far as proteins go, it is very small and simple structure. It’s a single chain polypeptide with a molecular weight of only 60000 grams per mole. The poison is a so-called ionophore, affecting the permeability of red blood cells. Many small ions, including those of calcium (Ca2+), enter indiscriminately. The wounded animal’s red bloods, about 75% of them, then burst.  This leads to a severe shortage of oxygen throughout the body. The release of ions from ruptured cells also wreaks havoc in kidneys. Convulsions, paralysis, and death ensue. As far as natural poisons go, diamphotoxin is highly potent. Whereas the lethal dose that kills 50% of animals (LD50) for chlorotoxin (scorpions), nicotine, amatoxin (amanita mushrooms) and frogs’ batrachotoxin (from poison dart) is 4.3, 3.3 , ~0.5 and ~0.002 mg/kg, respectively, diamphotoxin’s is only 0.000000025 mg/kg (25 picograms/kg) for mice. That implies that one gram of pure diamphotoxin would be enough to kill (50%)*(1012 pg/g)*(kg/25pg)*(mouse/0.020 kg) = one trillion twenty-gram mice.

Although the San groups have no molecular explanations for their weapon of choice, in order to develop the method of preparation, they have performed a type of laboratory science, with all its trial and error. And just like with modern science, it took a leap of imagination to think of extracting the poison from an insect’s larvae in the first place. Unfortunately, unlike practitioners of  Western science, the San groups have not left any written records of how and what their previous generations have discovered.