Can the moon’s sidereal month be calculated without using Kepler’s Laws? I’m sure one of Jean Meeus’ books has something to that effect, but since I haven’t seen anything of the sort online, here I go.

A lunar synodic month is the time it takes the moon to go through one cycle of phases. Its orbit, like any type of astronomical orbit, is never a perfect circle and is mostly controlled by the earth’s gravity. But the sun also plays a minor role in determining the lunar orbit, so the particular alignment of the Earth, Sun and moon will affect the length of the synodic month by as much as 13.5 hours.

If we measure the lunar month by how long it takes to complete one cycle of phases relative to the background of the stars, we are considering the lunar sidereal month. As the diagram reveals, the synodic month is longer than the sidereal month. To return to one of the 4 phases arbitrarily chosen, the moon has to complete one full turn(sidereal) around the earth, plus the equivalent angle covered by the earth in the time that it takes for the moon to be realigned with the sun’s centre and the earth.

Two different months follow from two reference frames—the stars’ background for the sidereal month and the moon-earth sun’s centre alignment for the synodic month.  The diagram is mine and homemade with instruments from the 16th century known as the pencil and compass

Even though we will be neglecting the gravitational effects of the sun and even with the assumption that we are dealing with circular orbits (the latter is mostly corrected by the fact that we’re working with average values), we will calculate the average sidereal period and get within only 1.7 seconds of the accepted value. That’s a bit of a wow.

During the sidereal period, L, the earth moves at least (L days)/(365.2422 days)* (360 °). As a result the moon needs to cover part of that θ angle (see diagram) to get back to the full moon. Most of the extra time needed will be the above number of degrees divided by 360 and multiplied by the sidereal period L. Simplifying the expression, this added term becomes L²/365.2422. But the synodic period is not simply L + L²/365.2422. During the extra time that elapses while the moon covers L²/365.2422, the earth is not sitting still, waiting around with a coffee. It keeps revolving around the sun. So if we repeat the calculation we extend the total time needed with a third term, L³/365.2422². This continues and the times added on get progressively smaller. When we add them all up, we observe a geometric series:

A quick reminder on how to evaluate such a series:

We let the sum Sn = a + ar + ar² + ar³ + …. ar n-1. By simply multiplying the entire equation by r and by subtracting the two equations, if we then factor and solve for Sn, we will obtain the expression

If we then take the limit of the terms as n approaches infinity, as long as -1< r < 1, the second term approaches zero and a simple formula emerges:

The synodic period has been long been averaged out by the Babylonians and is also represented by the molad interval of the Hebrews. We now have one or two extra decimal places, so we’ll use 29.530556 days.

Another geometric series emerges when we calculate the time between tides. A superficial analysis would lead us to the false conclusion that there are four tides every 24 hours or that 6 hours elapse between successive tides. Instead, while the earth rotates tthough the tidal cycle, the moon keeps orbiting our planet. A similar analysis leads to a total tidal period of

Incidentally the cause of tides is often poorly explained in otherwise quality-college physics textbooks and on reputable websites. Contrary to the misconception,  the earth’s centrifugal force towards the moon-earth barycenter (center of mass) is not part of the reason we have two high tides. One can easily do the math and reveal that the centrifugal force is over 80 times weaker than the moon’s gravity even at a distanceΔ from where it presumably creates the second high tide. As explained by a physics professor(Donald E. Simanek)  who pondered the matter and researched it properly.,

The deformation of land and water of the earth due to the gravitational forces of the moon and sun acting on every part of the earth. This deformation results in two “tidal bulges” one on the side of the earth nearest the moon, and one on the opposite side. These “drive” all of the tidal phenomena with a periodicity synchronized with the moon’s position in the sky.

If you’re wondering why there are two bulges, you have to use vectors to calculate tidal force accelerations for a particle at various points inside and on the surface of our planet. When the gravitational equation is manipulated and part of the expression is represented by a McLaurin series, only one term with a ± in front of it contributes to the tidal forces, leading to following differential field shown in the illustration. The term has a  Δr in the numerator, which represents the difference in distance from the centre of Earth and also an R³ term in the denominator, where R is the distance between the earth and the body exerting tidal forces on it. The latter explains why the tidal forces depend more on the moon than on the sun. If one would naively apply the inverse-square law to rationalise tides, they would conclude that the tidal force due to the sun would be (Ms/Mm* Rm²/Rs²) or 177 times stronger than that of the moon. (Ms and  Mm represent the masses of the sun and moon respectively, and Rm and Rs symbolize the earth-moon and earth-sun distances. But the terms with the R³ term portrays the true tidal force relationship so that in fact the tidal force due to the sun’s influence is actually only 1.99 X 1030kg/7.35 X 1022kg*(3.84 X 108 m)³/(1.5 X 1011 m)³ or 0.45 of that of the moon. 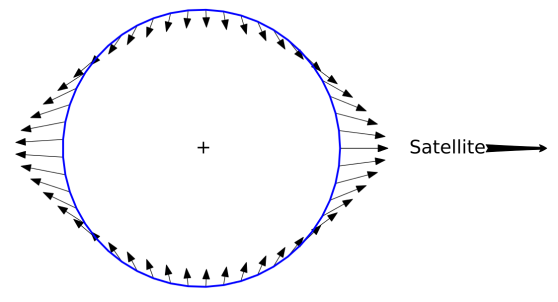 Once again a mathematical series leads to a serious result. 🙂