Patina is a beautiful, green mixture of products derived from copper at the mercy of oxidation, various forms of pollution and thermodynamics. It not only coats the Statue of Liberty but is found on bronze statues, copper roofs and old copper dishes, hence the name patina, Latin for dish.

If you take powdered copper and heat it in a crucible, the combination of increased surface area and higher average kinetic energy augment the likelihood of successful encounters between copper and oxygen. What forms is CuO, named copper(II) oxide, once known as cupric oxide. Under natural and milder conditions, Cu2O forms. Although some sheltered bits persist as such, for most atoms it is not copper’s ultimate fate. In Cu2O, copper’s oxidation state is only +1. When further oxidation occurs thanks to moisture and oxygen, each Cu+  loses another electron to become Cu2+. The ions eventually bind to hydroxide(OH–) and to sulfate(SO42-), a sulfur dioxide (SO2) derivative. Hydroxide ion is a product of oxidation which also makes its appearance in the corrosion of steel. Sulfur dioxide, is an emission of volcanoes, smelters and coal power plants. The compound made is posnjakite, Cu4(SO4)(OH)6 · 2H2O , but it eventually turns into the same compound found in a greenish mineral named brochantite.

Brochantite, Cu4(OH)6SO4, more accurately represented as CuSO4.3Cu(OH)2, is usually patina’s main compound, but from naked eye observations alone, it’s obvious that patina cannot be only brochantite. For one thing, unlike Lady Liberty’s veneer, the mineral is either translucent or transparent, and the latter would not cling to her. 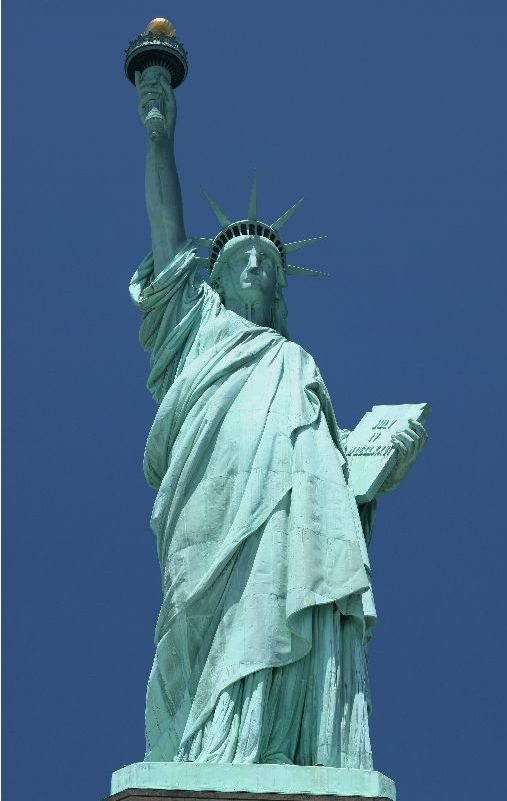 Prior to research done during the years of the Great Depression, it was believed that a different mineral , basic copper carbonate— malachite (CaCO3.Cu(OH)2) was patina’s major constituent. The chemists’ investigation revealed that regardless of the patina’s source, it was only a minor component which nevertheless contributed to patina’s opaque nature. Interestingly, if the patina’s origin was rural, it would makeup a bit less than 3% of the whole; if from London, the percent of the carbonate mineral would be as high as 24. The higher concentrations of carbon dioxide in the urban setting were responsible for this as copper ions soaked up CO2, combining with ionic products of the gas. If it were not for the prohibitively expensive cost of copper roofs, replacing typical bituminous (so-called asphalt) roof shingles with copper ones would be an attractive green alternative, in more ways than one. 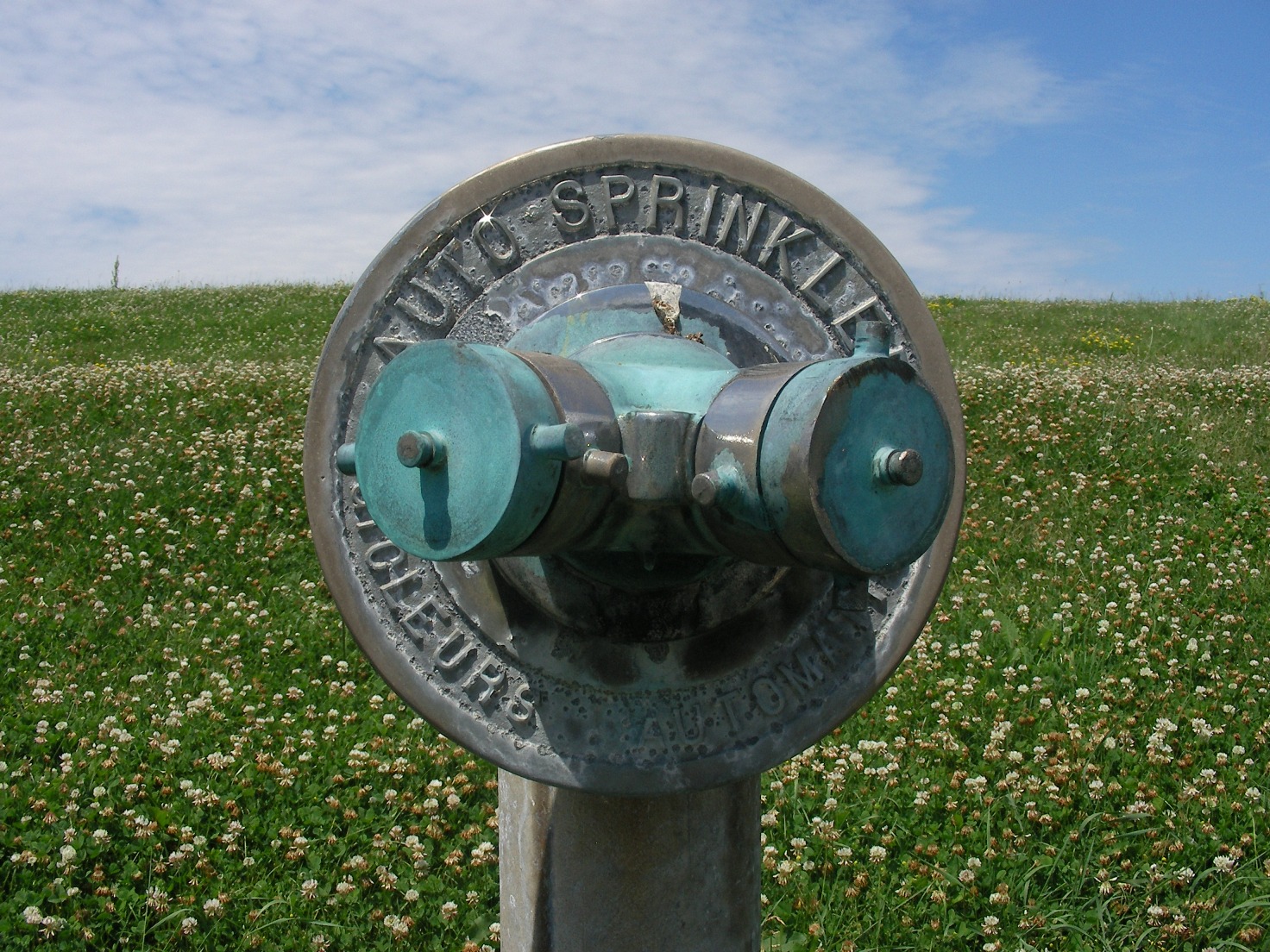 Patina on outdoor plumbing in Montreal.  Copper’s proximity to the sea and its source of chloride will influence the percentage of a third green mineral constituent, atacamite (CuCl2.3Cu(OH)2).

During the Statue of Liberty’s restoration 25 years ago, Bell Research labs applied some more sophisticated techniques than were available during the depression years to analyze patina. They found that in some samples, atacamite was even more prevalent than brochantite. (I wonder if patina from cold inland cities exposed to lots of winter street salt also show elevated levels of atacamite.) When they heated patinas, mass spectrographical analysis of the resulting gases not only confirmed the presence of carbonates from the decomposition of malachite but also oxalates, another indication of patina’s complexity.

But what makes the minerals cling to the copper underneath the patina? To investigate this, the Bell researchers used acetone, the main constituent of nail polish remover. This solvent will not dissolve patina’s minerals but will extract various hydrocarbons which were revealed by mass spec to be monocarboxylic acids, alkanes, and polynuclear aromatic compounds. If old patina is removed and placed on a fresh sheet of copper, within a week organic pollutants will bind it to the unoxidized metal. According to another Bell study, old patina’s “organic glue” is strong enough to make it resistant to most acidic precipitation, with the possible exception of acidic fog. Do not, however, imagine that the patina is completely insoluble. A copper roof’s patina loses between 1.0 and 1.5 g/m2 of copper per year according to a 2002 Swedish study.

The strength of the bond between patina and metal is up to point proportional to the time the patina is exposed to the atmosphere. There are many recipes that can be used to quickly form patina, but the lab versions tend to flake off. Powder X ray diffraction techniques also reveal that synthetic patinas have smaller crystals since they formed more quickly. These characteristics help investigators identify forged artifacts which are given a fake coating to make them look old. The uninitiated often do not realize that even in a non living colored mixture, there is far more than meets the eye.

Years ago I tried to make artificial #patina, the stuff that covers old bronze statues. ‘Found the sample. Turns out to be just a hydrate of copper citrate.

Evidence? When I BBQ’d it, it went from patina-green to blue as H₂O from crystalline structure was driven off.

We have all seen supposedly colorless water in a glass and in raindrops on a windshield. If there’s little air in it, water even looks colorless when it forms ice cubes. The fixed but incorrect idea that water is intrinsically without color survives in many of our minds even though we all observe various shades of blue in snow or glaciers or in large bodies of water.

If you put a bit of shampoo in your hand, you will notice that it looks a little lighter in color than when it sits in a bottle. This makes us aware that light’s path length (as light moves across a transparent object) influences the intensity of color. Could it be that water only appears colorless when there are not enough molecules in light’s path to remove some of white light’s components?

I like to demonstrate this by simply using a large 8 inch white mixing bowl. If it’s only 1/4 filled, the water still appears like it does when coming out of the tap. But when about 3/4 full, a pale blue colour becomes obvious. The bowl’s white background helps because light bounces back and forth within it, allowing even more vibrating water molecules to absorb a red portion of the spectrum. Deprived of a bit of red, water in most of its forms consequently transmit a pale blue light.

One can argue that the tap water I used is not pure. Admittedly, various ions, algae and even suspended silt and mud can definitely introduce all sorts of green and brown hues. If you fill a mixing bowl with deionized water from the lab, which is created by forcing water through an impurity-removing column, the water is still colored.
Here’s another picture that looks less greyish. It was obtained by placing the same deionized water in a narrower but taller white container.

According to the Journal of Chem Ed authors, a better way to demonstrate this is to use a 3 m long by 4 cm diameter length of aluminum tubing with a Plexiglass window epoxied to one end of the tube. I tried it with a 2.5 m by 4 cm plastic pipe, sealed with a glass stopper. When I photographed it with a flash, I did see a beautiful blue color, but my control (a picture of the pipe without the water) appeared just as blue!

In order to eliminate the scattering of blue light from suspended particles in water, it’s not enough to use deionized water. Microfiltration is also necessary. Once that variable is removed, the persistent blue is sure to come from the 3rd overtone of the oxygen-hydrogen stretching vibration of the water molecule.

In fact, the only way that water will leave white light alone is if its hydrogen atoms are replaced with a heavier form called deuterium. The key absorption peak then shifts into the invisible infrared. The following spectra are from the J of Chem Ed reference cited below, and I’ve pointed out the differences between purified and deuterated water.

If you have the artist’s color wheel in mind, you may be confused by the absorption of red leading to the transmission of blue. Although red’s opposite is green, red’s wide range of wavelengths is actually complementary to all hues of green, cyanide and blue. I’ve drawn a color wheel which is proportional to perceived wavelengths to illustrate this point.

Don’t feel bad if you were unaware of the color of water. You have company. When Kurt Nassau published his book on colour in 1983, and even a decade later when an excellent article in the Journal of Chemical Education appeared on the subject, the authors pointed out that many scientists were under the illusion that water was intrinsically without color. I looked through my own books and found in The Flying Circus of Physics a completely incorrect explanation for why a lake can seem blue, attributing it mainly to reflections from the surface.

Kurt Nassau. The Physics and Chemistry of Color: the 15 Causes of Color. Wiley-Interscience. 1983

Jearl Walker. The Flying Circus of Physics. Wiley and Sons. 1977

There are many reasons why camels can survive the desert’s arid conditions: In the 1950’s, Knut Schmidt-Nielsen and his wife injected a harmless dye in to a camel’s bloodstream. They waited a while for the dye to distribute itself evenly. Then they took a blood sample and measured the concentration of the dye. Then the camel went 8 days without drinking in the desert heat. Although it lost a lot of weight (over 40 litres of water), the concentration of the dye in the blood revealed that the blood had only lost about 1 litre of water. In other words the rest of the water had been lost from tissues.

This is the kind of calculation that the Nielsens used:

But how did they know that the camel had a 100L of blood without killing it ? Let’s say they had originally injected 8.0 mL of 6.19 g/L of dye. After even distribution of the dye(before the camel went 8 days without drinking), the concentration became diluted to 0.000495 g/L, then
C1V1 = C2V2,

V2  is the volume of the camel’s blood.Knut Schmidt-Nielsen who passed away three years ago(2008) wrote at the beginning of his memoirs:

It has been said that schools impart enough facts to make children stop asking questions. Those with whom the schools don’t succeed become scientists.

Scientific American. The Physiology of the Camel. December, 1959.