The driest non-polar region in the world is Chile’s Atacama Desert. Some areas have gone 173 months without rain. At about a latitude of 20 degrees south of the equator, prevailing southeast trade winds carry moisture into the the eastern slopes of the Andes. But as the warm air ascends,  it encounters lower atmospheric pressure and expands at the expense of its own internal energy and cools. Precipitation ensues. As the remaining dry air descends over the other side of the Andes it compresses as it descends and heats up. Meanwhile the western shoreline is unusually deep, keeping the Pacific waters at that spot quite cold. There is also a cold current from the south, preventing cold onshore winds from delivering any moisture to the area. Dry air and no clouds for years on end are an astronomer’s fantasy, and it is why the Atacama Desert is the location of the European Southern Observatory’s Very Large Telescope facility (VLT). VLT consists of Antu, Kueyen, Melipal and Yepun, four telescopes that can be operated independently or in harmony to achieve a better resolution. 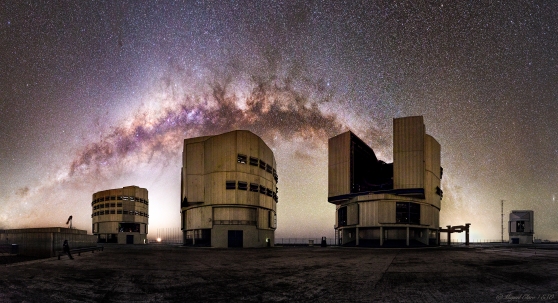 In the foreground VLT’s Antu, Kueyen and Melipal with the Milky Way in the sky.

VLT has been producing a large volume of sharp, beautiful images and noteworthy science. In 2009 VLT revealed that the star Betelgeuse has a vast plume of gas almost as wide as our Solar System and a gigantic bubble boiling on its surface. The star’s atmosphere is apparently constantly stretching out into space and then retracting, losing some material in the process.

Image of the supergiant star Betelgeuse obtained with the NACO adaptive optics instrument on ESO’s Very Large Telescope. The use of NACO combined with a so-called “lucky imaging” technique, allowed the astronomers to obtain the sharpest ever image of Betelgeuse, even with Earth’s turbulent, image-distorting atmosphere in the way. The resolution is as fine as 37 milliarcseconds, which is roughly the size of a tennis ball on the International Space Station (ISS), as seen from the ground. The image is based on data obtained in the near-infrared, through different filters. The field of view is about half an arcsecond wide, North is up, East is left.

Presently (late August, early September) from the southeastern part of North America, Betelgeuse is visible before dawn in the southeastern sky.  A star in Orion’s “right bicep”, it’s a red giant with an inconsistent peachy color.  A red giant that is massive enough to go supernova, Betelgeuse is within our galaxy, only 642 light years away. When it explodes some time within a thousand years, it will be bright enough to be visible on Earth in broad daylight. The plume observed from VLT reveals that Betelgeuse is asymmetric. All red giants shed material, but Betelgeuse is not spewing it out equally in all directions.

Two years later, again using the VLT,  astronomers discovered a surrounding nebula, bigger than Betelgeuse itself, stretching 60 billion kilometres beyond the star’s surface, or approximately 400 times the Earth-Sun distance.  The visible part of the nebula turns out to be made up of silicate and alumina dust. When we looked at the cosmic origins of the chemical elements, we learned that silicon is formed from a massive star capable of generating the necessary temperature and density. A red giant of Betelgeuse’s dimensions satisfies those requirements. With regard to the prominence of aluminum, it suggests that supernovae are not the only source of that element. 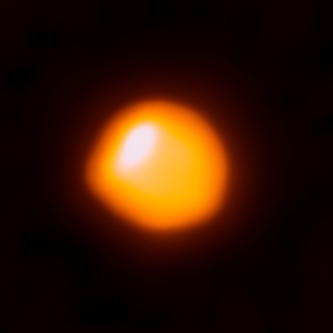 Array(ALMA). ALMA has just come up ( in 2017) with the highest-resolution image of Betelgeuse to date. It gives us a clearer look at its asymmetry.

A question that may arise is how can a star that’s approximately 20 times more massive than our sun reach the supernova stage in less than 10 million years, while our star, which although isn’t massive enough to go supernova, is still billions of years away from reaching the red giant stage? A very rough calculation will shed some light on this. Twenty times the mass means that there will also be 20 times the fuel available; however for stars of that size, the luminosity ratio is roughly equivalent to the mass ratio of the main sequence stars raised to a power of 3.5. In other words Betelgeuse has more fuel, but the added heat from the much stronger gravity makes the fuel at the core fuse at a prodigiously higher rate! The time that Betelgeuse spent on the main sequence was only 20 / ( 203.5) of the time that will be spent by our sun. Our sun’s life span on the main sequence is about 10 billion years, but Betelgeuse only spent 10×109[20 / ( 203.5) ] or about 6 million years, if we respect significant figures. 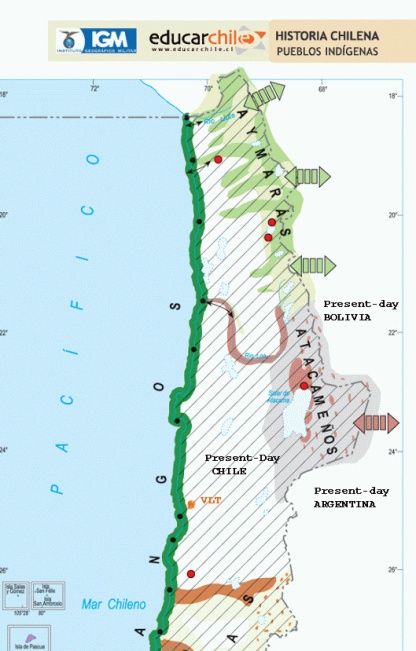 The Atacama desert was named after a group of people who settled the northeastern border of the desert at least as far back as 500 AD. The Atacama people, known as atacameños or atacamas, used Rapé  smoking ceremonies, which they believed brought them closer to the gods. It’s fitting that their desert now hosts instruments and minds that try to get closer to distant secrets of the universe.

We are all too aware of individuals and organisations who borrow vocabulary from science without necessarily being scientific. Usually their efforts are not beneficial to society. And although they are often exposed, like figures of organized crime they either continue to thrive, or they are merely replaced by others.  Pinning the problem exclusively on the gullibility of victims and selfish side of human nature is also fruitless. Some deception comes from scaremongers, food-fad-cult leaders and conspiracy theorists. But there are also more subtle forms that are at least as pernicious: consumer front groups and insincere think thanks who, among other things, spread climate change denial. 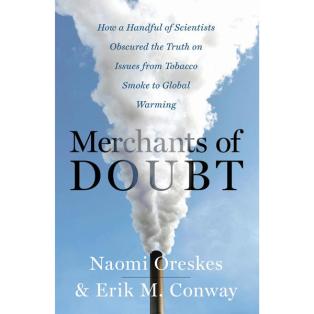 The book Merchants of Doubt reveals that politics has motivated a small of minority of scientists to side with specific polluters and tobacco companies. In the United States there is a strong carryover over of anti-communism from the Cold War with the former USSR. Any reminder of it, including forms of social democracy embedded within an overall capitalistic system, is viewed with suspicion. Moreover, to these individuals, health and environmental regulation demand more government intervention, leading to bigger government, which they perceive to be a threat to their individual and economic freedom.  It’s why a few scientists or science-trained individuals side with the irresponsible agenda of some industries. END_OF_DOCUMENT_TOKEN_TO_BE_REPLACED

People who grow plum trees in their backyards or farms realize that these plants not only reproduce sexually by means of their fragrant flowers, but they can also establish a ramet. A ramet is a colony of clones produced by roots that surface from the ground and which then develop into full trees. Barring mutations, the new shoots, called suckers, are genetically identical to the parent plant. This also occurs in the wild. The world’s largest known organism, by mass, is a ramet of trembling aspen trees covering 43 hectares in the Wasatch Mountains in Utah. It is named Pando, Latin for “I spread”.

The aspen, Populus tremuloides, is one of many species of the genus, Populus. The tremuloides part of its scientific name, which designates its species, and the “quaking” or “trembling” part of two of its many common names originate from the fact that in the wind, its leaves tremble persistently. Mechanically it happens because the petiole (the long part attaching the leaf to the stem) is flatter than usual and also because the petiole’s flat part is at right angles to the plane of the leaf. When a leaf of the trembling aspen is disturbed by the wind, as the leaf turns, the flat surface of the petiole is then exposed to the same force and turns it back to its original position. Then the cycle repeats.

As to why such a feature has evolved, interesting hypotheses from ecologists and botanists have been proposed. The trembling may help the leaves absorb additional CO2, prevent excessive heat buildup and conserve water. It may also deter insects from feeding on the leaves.

Ecologically, the trembling aspen can play a key role as an intermediate tree towards the succession of more mature forests. Forest fires actually stimulate the aspen to clone itself; a ramet of 100 000 to over 200 000 suckers per hectare can prop up after a fire. They help feed a variety of wildlife including deer, sheep, elk, voles, hares and porcupines. When beavers chew aspens down, the cutting action, like fires, stimulates them to produce suckers.

Another intriguing adaptation of the trembling aspen is the way it responds to insects such as the aspen tortrix (a caterpillar) after they start to feed on its leaves. Their cells begin to synthesize salicortin and tremulacin, two glycosides that are toxic to insects.

These compounds are probably derived from phehylpropanoids, which are in turn made from aromatic amino acids. Since nitrogen is often a limiting factor for plants, it is one of the reasons that the protective compounds are only made when the need arises. You may also notice that, in both toxic compounds, the aromatic part attached to a pair of oxygen atoms is the basic structure of salicylic acid (aspirin’s raw material). The former is also chemically related to a pair of other natural products found in aspen, populin and salicin.

This remarkable set of adaptations of the aspen tree is why it’s the most ubiquitous tree in the world’s second largest country, Canada. It is found in all 10 provinces and two of the three territories, coping in a variety of soils and at a range of average temperatures cooler than those of the rest of the continent. Although it is difficult to predict the impact of greenhouse gas emissions on forest distributions in a pinpoint fashion, unabated climate change will move aspen forests away from lower latitudes.

US Department of Agriculture —Forest Service